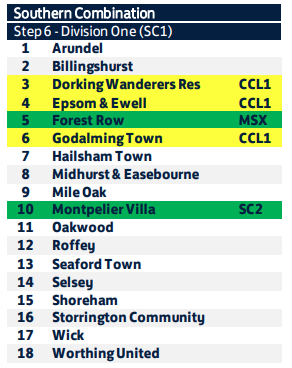 The FA have confirmed the National League System restructure for the 2021/22 season is complete. It means that Godalming Town will move from the Combined Counties Division 1 to the Southern Counties Division 1 – a sideways Step 6 move. The full FA statement reads:
“We can now confirm that the National League System (NLS) restructure at Steps 4-6 has been completed and the club allocations for the 2021-22 season have been confirmed, subject to FA Council ratification. The restructure will see 107 clubs in total upwardly moved within the pyramid at Steps 4-6 in order to facilitate the new divisions, with a new additional division at Step 4 and two additional new divisions at Step 5 and a reduction of divisions, from 20 to 17, at Step 6. The restructure will have a positive impact on a significant number of clubs, supporting them with reduced travel and costs and providing greater opportunities for generating income via localised fixtures. We would like to thank all of the clubs across the National League System for their hard work and effort in completing their applications for upwards movement and we look forward to welcoming them back for the 2021-22 season.”

Godalming Town Football Club is a semi-professional football club based in Surrey. We are currently members of the Combined Counties League Division One.